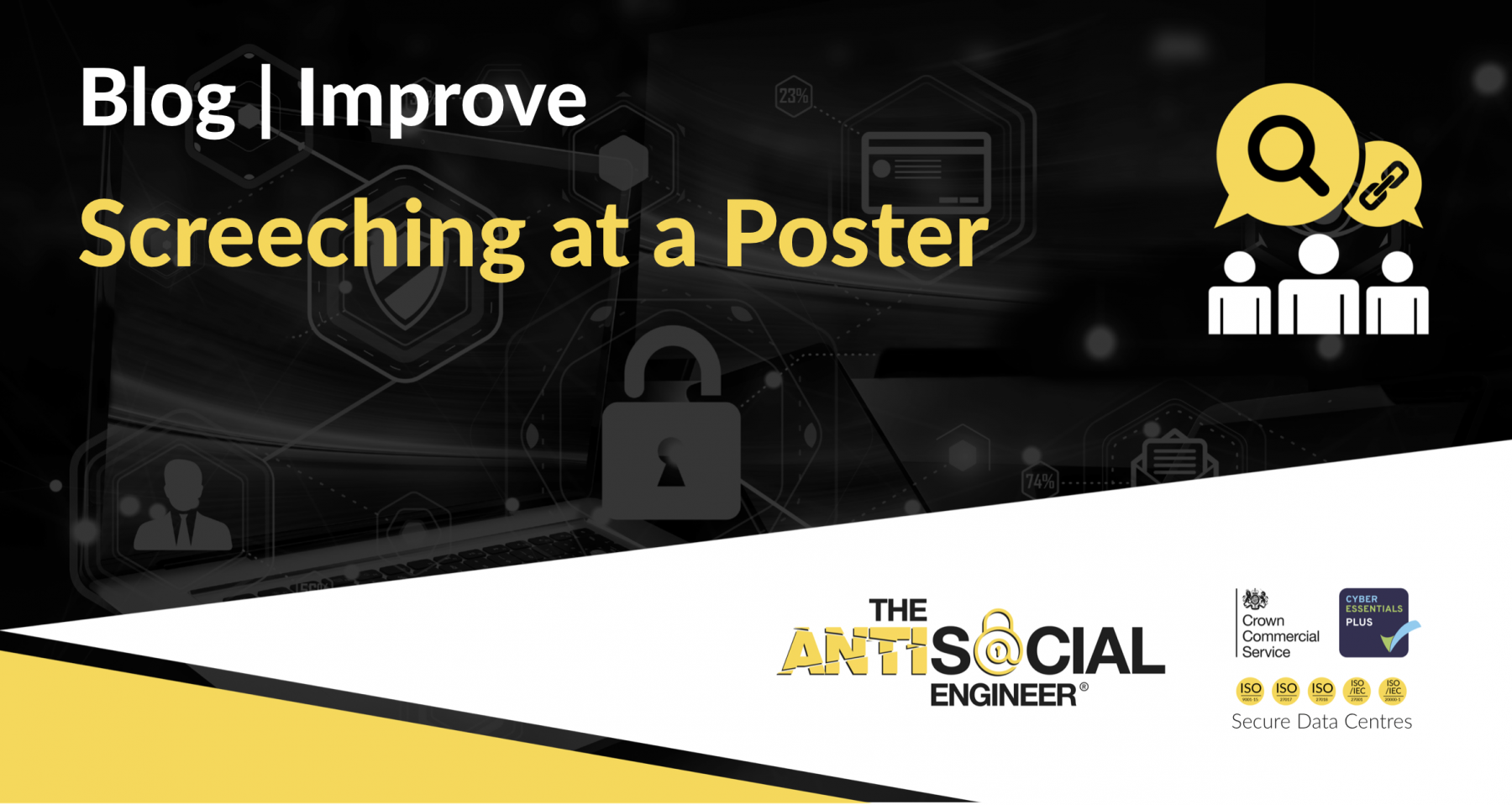 You might have missed last weeks incident on Twitter. It started off as a casual bit of annoyance, but quickly escalated in to a full on witch hunt for the Police. For those of you hiding under a rock and not out sharpening your pitchfork with the rest of InfoSec. Someone made a poster and loads of people hated it.

For a second I thought Clippy had made a comeback and spurred a bored local bobby into doing this, but you can clearly see the NCA logo on the bottom of the poster. Surely they fully endorse this message? This message showing the emblem of the National Crime Agency, peddled by upstanding officers of the law… Well it seems they did not. In fact the NCA took to social media to explain they had no part in the creation of the hideous document and guided concerns to some of their many positive efforts to engage with teens.

Whilst I would love to hate this poster, the way the ‘cyber’ people don’t understand png transparency. The attempt to make the tools of my trade somehow illicit and illegal and connected to ‘hacking’. The stigma being attached to clever, curious children. The blatant laziness of the design and message.

I actually liked it.

It shows the faintest glimmer of an attempt. It says to me, someone, somewhere is trying and is maybe still passionate about helping children enough after a day of corporate slavery and flack from social media, that they have made this poster. I ponder the history of the word file and I’d very much like to meet the person who made it.

For me to explain why I like it, I have to share something you might have heard me talking about before. It’s the concept of being governed by consent. In essence, our very desire to have a police force in the first place.

In 1829, a list was made and passed to every new officer in the UK. It was to be a new era of policing and one that much of the public actually welcomed with open arms. The rules, known as the Robert Peel’s 9 Principles of Policing are as follows:

I feel the poster hits this ethos perfectly and asks for collaboration and assistance from parents.

The poster was only one person’s interpretation of this guidance. It was made by someone trying to follow these antiquated ideas in a digital world.

This poster wasn’t the outcome of a collaboration between Saatchi & Saatchi and the Home Office. There was no million pound budget for graphic designers.

Did Anyone Read It?

What flash graphic designers can do well, something this poster needs a big dash of! They can get the point across. They can take a feeling or an idea and portray it with words, colours and shapes. I sadly think the true purpose of this poster is squashed under so much nonsense and just above the pirated NCA logo.

No they weren’t looking for you to go up to tiny Tim’s room with a bread knife and start cutting away at the mattress in search of WiFi Pineapples and patch cables. They were actually asking for help from parents in identifying the young’uns with a liking for some hax.

It’s almost standard practice to completely stop speaking English and start sounding like this when you become a police officer. The simplest of phrases start to sound like they are from bond villains. Are we going to kill you Mr Bond? “Of course not, we are simply going to apply some ‘positive diversions’ muh ha haa haaarrr”

They Are Coming For Your Kids

The police have the worst PR ever. If you hate them you are cool, if you help them you are a square. Yeah yeah I get it. F*ck da police, until someone attacks you or impacts on your freedoms then you’re complaining about the wait time on 101 right?

I’ve done some crazy things in my younger years and I’ve shared all viewpoints along the way. It’s in maturity I think you zoom out and see the bigger picture. We actually need a good and effective police force. When I see passionate people trying to engage schools with little competitions such as Matrix Challenge, I compare this to my own childhood desperately curious about computing but there was nothing from the police on the matter. I remember being chased off a building site as a teen, but they didn’t offer careers advice where I was from.

With less than a 1% conviction rate for cybercrime, all policing efforts have been turned to prevention. That means there is nothing stopping you requesting some time with your local cybercrime unit and welcoming them in to your homes and organisations. For god sake if you invite them it saves them the hassle of making more posters.

Think You Know – Cyber advice and solutions for all age ranges. https://www.thinkuknow.co.uk/

NCA Prevent – Hub for anything NCA helping your kid. https://www.nationalcrimeagency.gov.uk/what-we-do/crime-threats/cyber-crime/cyber-crime-preventing-young-people-from-getting-involved

Police Cadets – Be inspired to develop yourself and others. Enjoy learning new skills and doing something exciting and worthwhile volunteering with the police. https://vpc.police.uk/