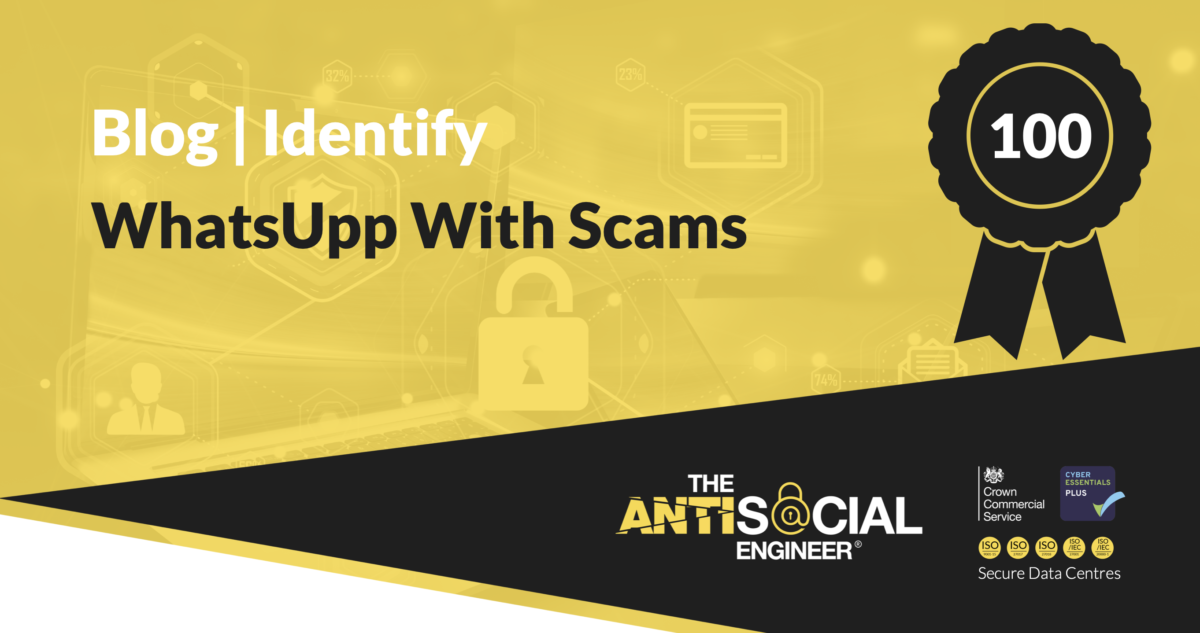 In some countries, being a scammer is as legitimate a profession as being a nurse or a teacher. When jobs are sparse and education is out of reach of many, often people are forced to put morals aside in order to feed their families.

If you’ve ever watched scambaiters such as Jim Browning in action, you’ll have heard the same story over and over, and sometimes, may even go as far as feeling sympathy for the scammers.

This is the dangerous line I was treading recently when I decided to have a bit of a spring clear out… I wanted to clear out some old technology from the drawers. My concerns of usable gadgets slowly perishing away and not being put to good use overpowers my decision to hoard things that I may someday need. A few minutes later an advert was live on Gumtree.

Why I Hate Selling Online

To be perfectly honest, I had been meaning to do this for a while but the deterrent is always the people that you have to wade through to actually make a sale. When selling online, you are exposed to these weird meetings in car parks, ridiculous offers at half the price and often rude people. But forever optimistic of the human race and trusting enough that this time would be different, I continued.

It didn’t take long for interest to spark in a Samsung Galaxy A20e that was for sale for £80. A message on WhatsApp asked if the phone was still available. Looking at the +44 number and a picture of a young chap and his partner in the profile image, nothing stopped me sending the reply “Aye”. The follow up response seemed genuine too – it was a question I would ask if I was buying something from Gumtree “How long have you been using it?”. Now this question was so under my own radar of scams, I let go of any concerns I should have had and defaulted to salesman mode – keen to get the best of the situation and stay strong in the inevitable bartering process. “It’s near new. Not been ‘used’ as such. I work in tech and bought the device, since then it has been in a draw”. I was confident that my Arthur Daley game was strong and my own version of events wasn’t too far away from the truth.

The reply from the buyer seemed hopeful, my device and sales acumen was obviously appealing enough to worry about the logistics of the situation, “Where are you located?” he responded. As always, meet people from the internet in a public place, somewhere you are comfortable with – I chose the business park we work at and provided him the address of the carpark. Then came the blow: “Maybe you can send the phone by Gumtree delivery?” – The scammer. 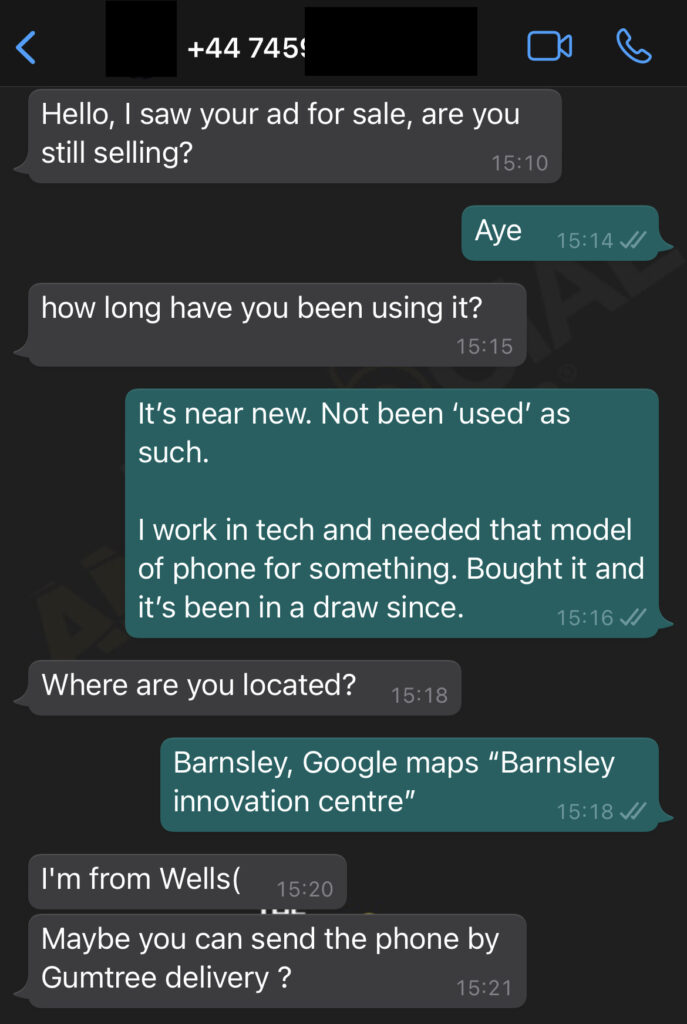 I was irked by this, how dare he come to me and try to scam me. Do you know who I am?! I am at least the third most famous Richard De Vere I know, after my namesakes in an old TV show and the Blackpool magician that passed away. My reply was angered. “Man, that’s such a lazy scam. Treating me like a mugu is just disrespectful. You’ve got to take pride in your work, go the extra mile, reach for the stars. All I am saying is this is some yahoo boys, weak ass shit and you can do better if you believe in yourself.”

I wasn’t expecting much more of a dialogue, the norm is just to block and move on when detected as a scammer, but the reply I received was one I felt compelled to know more about: “Where I’m from £100 is a lot of money, that’s a man’s monthly wages.”

I asked him to “tell me more, Accra?, Lagos?” as I tried to guess his location.

“No, Ukraine” [Later confirmed as Donetsk People’s Republic] and after a short, honest conversation he explained he was sorry: “forgive me, I don’t want to hurt people”. He mentioned there was no other way out of abject poverty in the area and the scams he was hoping to commit were to fulfil his needs for food. 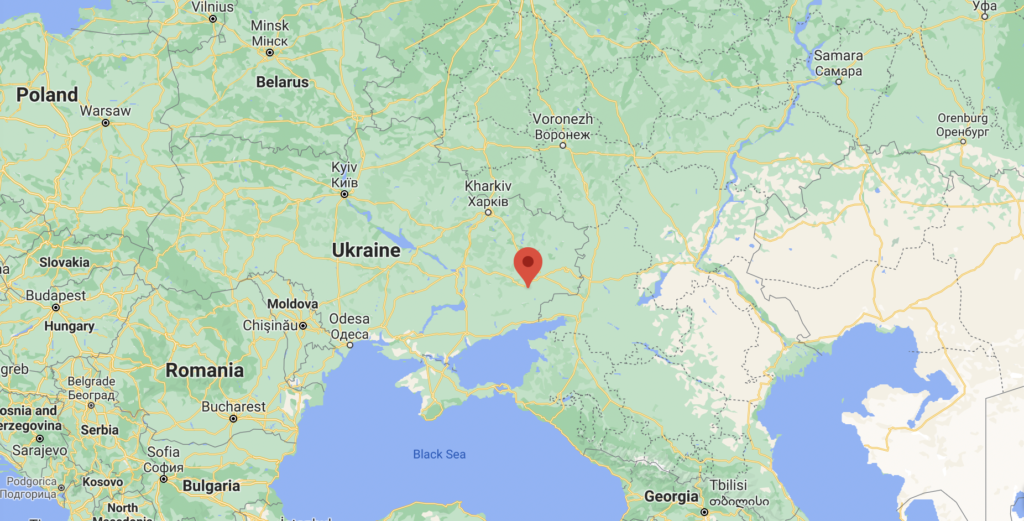 A common debate on morality asks whether it would be wrong to steal a loaf of bread to feed your starving family? The Catholic church actually is quite liberal in their views on this.

Even the fact I can sit in my office and debate the philosophical elements of this scenario is a privilege I have.

But I know I wanted to know more about this person and what motivated him, what techniques he used to scam.

I offered him a chance to explain himself – to provide me with an insight into why he chooses to do this to people.

So I Actually Interviewed The Scammer

I advised him not to identify himself, but was keen to know more about who he was.

I am 18 years old, and I have family and friends.

I went on to ask him to explain how he chooses his targets.

There are many ways, but the main way is that the British [people] themselves give their contact information for this.

What process did you follow to set up your UK phone number, or was the WhatsApp account hijacked?

I was curious as to how he would have tried to convince me to post the phone, had I not outed him as a scammer – so I asked.

You don’t normally have to convince people to do it. They’re not asking for anything.

I asked what he would do if the scam succeeded – would he normally send the parcel to a person in the UK or straight to Ukraine?

This information is very secret and I cannot reveal how it works. But I will give a tip – it will not reach Ukraine.

One of the questions I was most eager to ask – how often do people fall for this scam?

There aren’t actually many people who fall for it, most people aren’t that stupid.

OK, so if scamming wasn’t so fruitful after all, why did he do it? I asked him why he ended up in the line of ‘work’ instead of say a doctor or a salesperson.

It takes money to get an education, but my family doesn’t have any. So I have to work to support [them]. When a person has no money it is difficult to get out of this life situation.

I then asked about his alternatives.

Work is very scarce and poorly paid but legal work is sometimes obtainable.

I would like to tell you that the news in Europe is loyal to the Ukrainian side – Donetsk is presented as separatists and terrorists but here live simple peaceful people who want to live peacefully without war. There are the same people in Ukraine who want to live without war, but politics does not spare anyone.

I also offered him the chance to share a photo for the blog. He sent the below photo.

There are both private and multi-storey houses that are grey and gloomy, but we still see our homeland in them and love it. 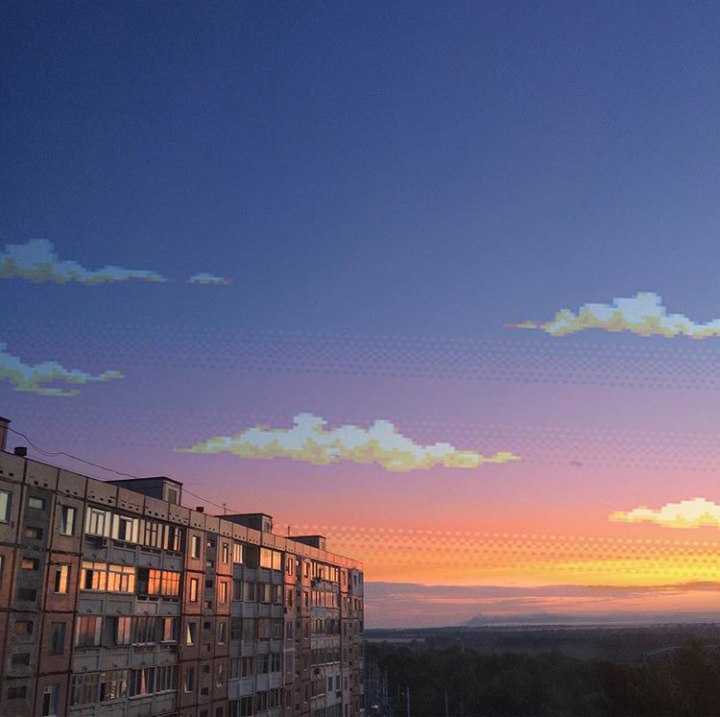 On one hand,  the skeptic in me is imagining the harrowing story and details provided could also be lies. This isn’t my first rodeo when it comes to scammers but so many details I observed, things like checking his mobile phone via HLR would have been hard to fake. The evidence swayed towards a genuine scammer, if such a person exists.

I am left dissecting what was supposed to be a simple interaction with a fraudster. Sifting through the chat and questions asked, some details stand out…

The scamming process aside, we see yet again that humanities’ socioeconomic issues are manifesting themselves via crimes. The Gumtree scam was the least interesting thing for me in this story. It was amazingly lacklustre. The real story is how a young adult finds himself on the brink of war, in a high-rise housing block talking to me about fraud, life and the future.

We need to do this more in our industry, I’m bored of screenshots of failed scam messages on social media. We need to start addressing the real issues and understanding the people behind the keyboard more. Humans are all we have and we better start understanding them.

I’m mentally exhausted on this one. I try to leave people better off but it’s really hard this time. I get requests weekly from people that want to become a social engineer or get into the cyber industry and it’s easy in comparison to provide some useful advice. You just review a CV and give them things to learn or jobs to apply for. But it didn’t feel right guiding him to some coding class and promising him a better life. So I wanted to ask a question to the people who got this far in the blog.

I have asked person X to follow the comments on the blog and our social media and I ask my readers… What advice would you give to a young lad, with such overwhelming issues, almost forced into crime – but with a good heart. What would you do?