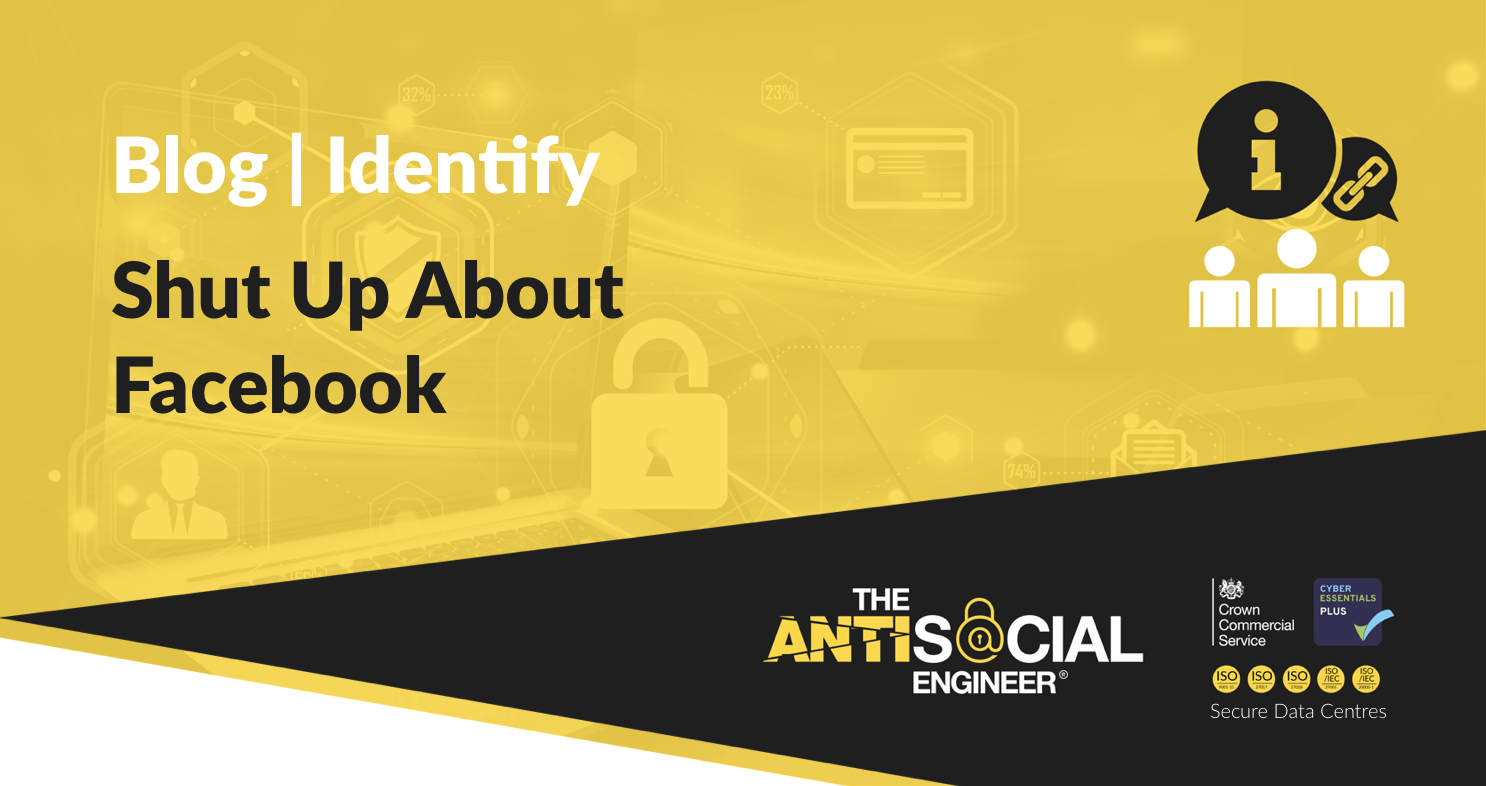 People seem annoyed recently that a little known company called Cambridge Analytica have been accused of doing some pretty dodgy things with our data.

I mean, it truly was an edge of the seat expose by Channel 4 – at some points it traversed from a gripping spy thriller to satirical comedy as the mark in such an horrific reveal of  corruption boasts about the strength of undercover journalism. I tried to take away something positive from the sketchy videos, as secretly we all know the truth and it can be quite overwhelming to face that nihilistic outlook on IT, big data and life in general. I just have a hard time understanding the outrage and condemnation of such an activity. Quite bluntly I wish people would shut up whinging about Facebook, in true hypocritical style though i’d like to explain my annoyance and better still try to impart some advice along the way.

You might of heard people trying hard to be philosophical and appear smart and edgy before on social media, citing “if it’s free you are the product” such profound comments are nothing new though. Allow me to cite this 2011 rap song, Titled ‘England’ by Jehst – “The news is confusin – it’s all manufactured Pop-propoganda – political actors, political factions and critical factors. Get kidnapped and sympathise with your captors” It displays a conscious knowledge of the problems of a modern data driven world but has the added advantage of being quoted from rap music, so hopefully I won’t be burdened with trying to appear clever. Such views shouldn’t be discounted though. Facebook and data driven entities are all after the same goals – get data, make use of data, sell data. It’s 2018, Facebook had its IPO years ago, their business model isn’t secretive. Alexandra Nix is on LinkedIn – he follows groups that talk about political manipulation with social media… it’s not a secret… Most things are transparent and clear to see. I guess we become annoyed because we have this misguided belief that big companies will show us compassion and humanity, ethics and be decent. These are human qualities and only ever used by big business if they want to tap into that ethos and propel their goals with it. Modern business is more machiavellian then ever. If you don’t believe me then visit a Lush Cosmetics store and witness them pretend to be eco friendly, dressed in a fair trade apron. Stood in the middle of a shopping centre denouncing capitalism.

Sure we can pick at the biggest of the biggest but you can see this ‘corruption’ happening everywhere. Let’s look at My Hermes, a logistics company. Their Twitter account is flooded with complaints, they have people running @expose_myhermes which aims to shed light on their tactics, tweet after tweet it’s just apologies and employees trying to firefight social media taking it to the shadows of a DM. My own personal experiences with My Hermes have culminated in parcel theft and manipulation of my own signature that would constitute fraud. But they are still here. They are still cheap. They still have the contracts – no one actually gets done for fraud, it would be almost ludicrous to suggest it. People complaining, negative PR, staff committing fraud, undercover reporters have all been factored in to their business plan. My Hermes might say “we are really sorry” but what they say on paper is the opposite. It’s a literal pledge of allegiance to their owners, investors and shareholders.

Businesses like Facebook don’t prioritise your precious feelings about data or privacy – you’d be a fool for thinking they ever would or there is hope of meaningful change in the social media space. If you get an apology from Facebook it’s because it was supportive to the share price, more cost effective than telling you to f’off. If we are blessed with an open investigation, it’s because a financial analyst thinks rebuilding public trust will keep profit projections on track. They have a legal duty to act in the best interests of shareholders. So say 5% of My Hermes take to social media with outrage, 5% of Facebook join them in annoyance – they will be fine. Business will be OK again. The sensationalist headlines point to Facebook losing a $50bn market cap but this is temporary, just look at share price over 5 years: 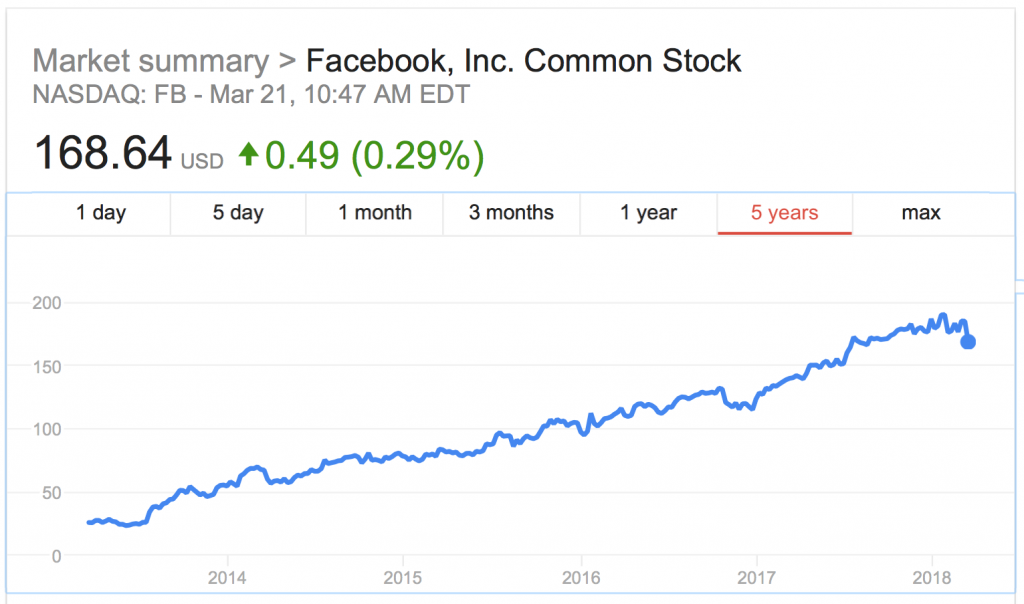 To the moon, collecting your data on the way.

So this isn’t a issue with data at all, it is with corporate governance and corruption in general. You can still buy Facebook’s customers data today. You can still filter and target people in the exact same ways. Hell, Cambridge Analytica weren’t even the only ones manipulating elections. Tomorrow we will see predatory loans targeting people based on ‘likely to drive a old car’ + ‘likely to have a low credit score’ + ‘Likely to have 3 children’ and in the following years people will be negatively influenced by such manipulation of their own data sure.

For your average Facebook customer this is something so far in their peripheral vision they won’t even think about it between doing pointless quizzes and growing their make-believe farms. I’ve seen InfoSec veterans delete their accounts in the past week but I can’t help ponder if Facebook sell the data of these people on exit to companies that sell privacy products, do they show them different adverts once they have taken such a public stance to delete Facebook. We are at that stage of being irked by the whole affair, but we haven’t thought about where it goes from here.

We could delete Facebook, but that won’t help you much as they would still hold historic data on you and continue to collect new data on you too with the use of ‘soft accounts’. Many websites will still contain Facebook tracking pixels and hundreds of other ways of collecting data for them. Let’s just say we go all out and smash the computer too, burn the smart phone and live a life of isolation on a remote island! that time frame you aren’t on social media will also create data as the absence of data is also a dataset – imagine your family being pitched family counselling or fostering adverts should you disappear to a cave. Would the feeling of isolation and loneliness without the data gobbling technology effect you worse than knowing you voted for Brexit and the occasional advert that tricks you into a visit to Ikea?

I think we need to calm down a little really. We want smart fridges to order our food and we keep buying new smart watches that track our heart rate and keep us healthy. We have roadside ANPR systems that collect data on cars and help police catch criminals… we like the idea of what big data can bring to society but I think we are blind to the leaders of these organisations. The laws are all there but when you take a walk down a shady path and do something illegal, you just say sorry. As long as you’re in a suit and not a real criminal that is.

So be angry, but please don’t waste that anger on a small business that had the foresight and nouse to use their tools to make a profit. Don’t be mad because Alexandra Nix put on a bloody nice smart suit and is the epitome of Eton privilege. Don’t be mad at the ones and zeros.

If you are angry, read the terms and conditions and ask yourself – is that their problem or yours?